This story was originally published on November 1, 2015.

“I could probably quit, too, if I really wanted to do it,” Carl told me over one of our many meals together. As a dozen small conversations floated around us, this particular conversation suddenly felt especially important. We were celebrating Bruce’s first full year of sobriety and giving thanks for the good works God had done in our midst, so it seemed likely that maybe Bruce’s landmark was making Carl think about his own addictions. We’d been eating with Carl in our homes and hanging out with him in the neighborhood for many months. We had prayed with and for him many times, praying not only for his health and safety, but also for his freedom from the substances that made him a slave.

“Yes, you could,” Carl’s wife Tasha interjected. Tasha had addictions and challenges of her own, but she and Carl had stuck by each other through so many of them. As an interracial couple, Carl and Tasha had faced even more challenges than other couples struggling with addiction. “Let’s do it together,” Tasha insisted, “I know if we tried together, we could do it.” Placing her hand on Carl’s arm, Tasha pleaded with her eyes for a little courage and hope from her husband. It looked like the beginning of a beautiful work of God’s liberating love in our midst even as we celebrated a different one. Nodding along with Tasha, I waited quietly for Carl’s reaction. 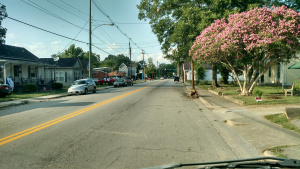 For another couple of years, we would pray and hang out with Carl and Tasha through good times and bad. When Tasha was clean for several days at a time, we’d celebrate because all freedom—no matter how long or short its tenure—is a good thing. We helped Carl find some work to do here and there when he could manage it. Both times they decided to move, we helped them take their things to the new place and listened to Tasha talk about how this place would be different. When Tasha was released from the hospital, it was one of our hospitality house doors where Carl and Tasha came to ask for a ride home. We ate with them, we laughed with them, and we cried with them. Carl may not have wanted to quit—may not then have been able to cultivate the hope that he could be free—but he wanted family and we were glad to call him ours, as he was glad to call us his.

For years, we tried everything we could think of to help Carl take those first steps toward freedom. We tried every key we knew to unlock the chains of addiction in our brother’s life. Countless prayers, long conversations, offers of help and support, frustrated and blunt honesty, and a host of other approaches—even Tasha’s earnest efforts—seemed unsuccessful in loving Carl into recovery. We kept praying, but I didn’t have much hope that the story would change.

Sometimes—not often but always surprisingly—people don’t break their chains, but just slip out of them when nobody is looking. 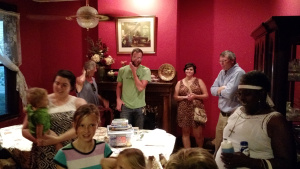 One day while we walked the neighborhood and checked in on a handful of folks, Carl nonchalantly announced to one of us that he had quit using about a week ago. We were so far away from hoping for what he was confessing that we didn’t quite understand what he meant at first. We asked him to repeat himself and he confirmed that he had quit a week previous and added, “I was just done. I didn’t want to anymore.” After years of obedience to the idol of addiction, Carl just walked away, quietly going through withdrawals with Tasha. We celebrated with him and asked him, incredulously, what had made the difference—what made him want to change. He shrugged and said, “I was just ready to be done and ready to feel better.”

We didn’t convince Carl to quit, but the chains fell off anyway. We loved him as best we could and tried to find ways to make room for him and Tasha in our little community. Sometimes, God doesn’t call us to unlock the locks and tear the chains off God’s beloved. Sometimes, God calls us just to love them where they are and wait for the chains to rust away from exposure to God’s furious and pervasive love. Last week, Carl completed his first full year of sobriety. He has a couple of jobs, a bicycle, a fairly secure place to live, and is active in our community in a few different ways. With his jobs and his lack of addiction, he has money to buy bus fare for him and Tasha to go different places in the city and have their own dates and adventures. It turns out that you can go a lot farther after the chains fall off, even if you still have to carry somebody.

When Carl arrives on Sunday night to pray and sing, he is eager to talk about what’s going on in the city and at Grace and Main. Of course, he also wants to know the score of the Cowboys game if it hasn’t finished yet. He’s proud to be free, he’s proud to have a big family, and he’s proud to be a part of our work at the Urban Farm and around the neighborhood. But, he’s most eager and proud to tell us about how Tasha is doing. Sometimes, he brags on how many days it’s been since she’s used, while others it’s bragging about how next time is going to be the time. “I know she can do it,” he insists, “I know we can do it together.”