This month’s newsletter is written by Jessica Hearne, a Grace and Main leader and founding member, Jessica is supported in her work in our community by the Cooperative Baptist Fellowship, where she is “Field Personnel.” You can read more about her work and find ways to support her directly here.

“The garden crew is back together again.” I look up from where I’ve been scrubbing a tablecloth and see what Sal is talking about. We’ve just finished our annual Grace and Main community Christmas dinner in the fellowship hall of one of our partner churches. There were ninety-six chairs set up when we arrived, and earlier this evening nearly every chair was taken. Most folks have already headed home, with to-go plates in hand full of delicious pork barbecue, smoked and donated for the third year in a row by a police officer friend who works in some of our neighborhoods. Some of our more outgoing friends are still sitting around tables, drinking coffee and enjoying each other’s company on this cold December evening, the longest night of the year. 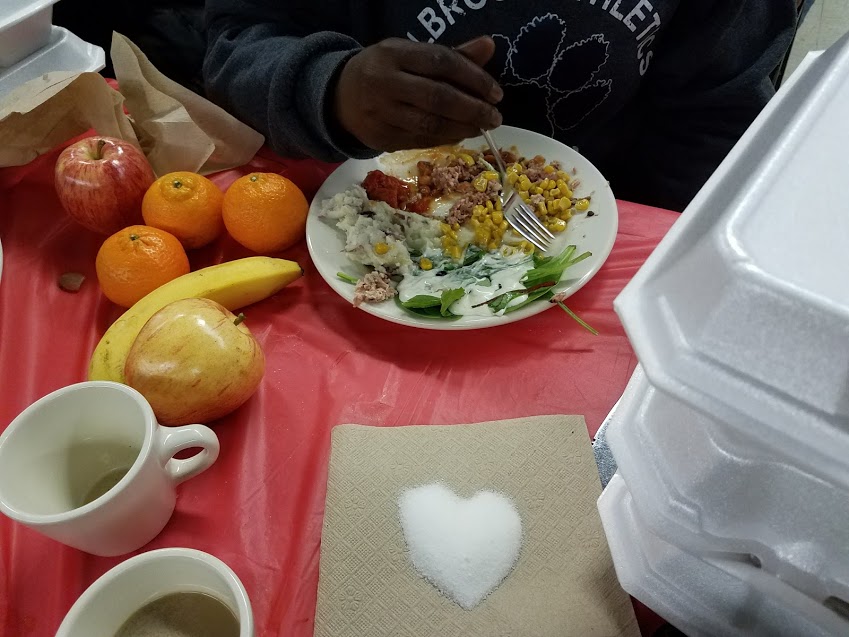 Since people finished eating, I haven’t been paying much attention to what was happening around me. Instead, I have been focusing on the work that is still ahead: returning this fellowship hall to the state it was in when I arrived this afternoon. One of the biggest challenges is these tablecloths. They are the disposable kind that you can get in the party supply section at Target or Walmart, but they had been set out by the church housekeeper in preparation for the Christmas Eve fellowship that was coming up in just a few days. We were invited to use them, and they add a nice, homey touch to our dinner, but I hadn’t anticipated how difficult they would be to clean. When Sal spoke, I was carefully holding one side of a tablecloth while gently wiping the food crumbs off with a damp towel onto the floor. I’ll have to see if I can get someone to sweep, I thought.

As it turns out, I didn’t have to ask. I looked up from the tablecloth to see Sal and Jamal already with brooms in hand. They were working their way through the tables behind me, sweeping up my mess and what was left from folks who had been eating. I turned around, and there I saw Robert and Jonny moving some tables back to where we found them before dinner. Most of the dishes had been taken to the kitchen by our guests as they finished eating (we like to use real dishes whenever we can as a way of showing people that they are valuable to us), but Tim was there collecting the few dishes that were left by folks with mobility troubles or kids in tow. Finally, I looked into the kitchen, and there was George stacking dishes on trays and running them through the industrial dishwasher. 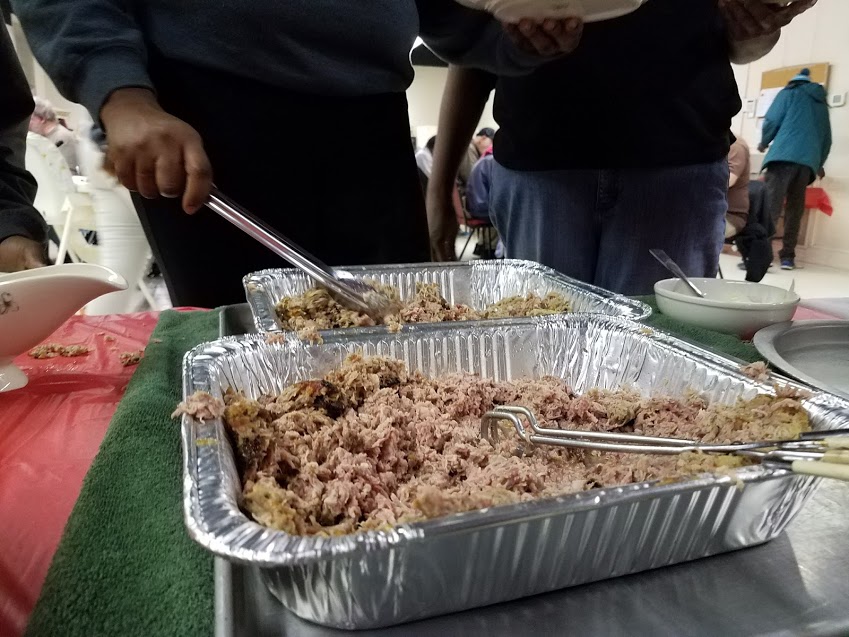 The garden crew is back together again. Sal was right. The people that were helping with the clean-up after one of our biggest meals of the year were the same people that I had been meeting every Thursday since the beginning of the summer to work on our Urban Farm on the north side of town. Some had started coming because they enjoy working outside, others to take advantage of the produce that we were growing. Many of them had claimed their own garden beds to cultivate, growing some food to take home and giving more than half of it away to their friends and neighbors. We had been meeting, working, laughing, and learning together for half of the year, finishing every workday with a trip to the grocery store so that folks could pick up a few extra things to go with their produce. As the season came to a close, we were already making plans for next year. Every time I see Stella now, she tells me about how she can’t wait to get back into the garden. Each week Tim, our resident amateur photographer, posts a new set of garden pictures to his Facebook page, with captions that demonstrate his longing to be back outside. And George and Sal remind me constantly to call them whenever we start having our planning meetings. These folks started as volunteers, but have grown, over the summer and fall, into a group of planners, organizers, and leaders.

Their leadership is being demonstrated in the aftermath of this dinner. I didn’t ask Sal and Jamal to sweep, but they took the initiative to help. George jumped at the chance to help with the dishwasher, getting there even faster than our regular dishwashers. Tim is collecting dishes in between his picture taking, handling both roles with joy. The camaraderie that started in the garden is still cultivating beloved community in the cold of winter, when the ground is nearly frozen and the sun is mostly hidden away. I look at Sal and say, “Yeah, I guess the garden crew is back together, huh.”

“I can’t wait to get back to the garden,” he replied with a smile.