***
Alex had to come down to the lobby to let us into his building, but we were glad to wait. As we all rode the slightly-too-small elevator up to the fourth floor, I couldn’t help but compare his current building with the building where he lived when we met him. Alex was a resident of the building we took to calling “Little Calcutta” because of its utterly dilapidated condition and unjust administration. Alex was one of the leaders who lived there and helped his brothers and sisters to stay strong when the owners first refused and eventually retaliated to the requests of the tenants. One of the gifts God gave Alex that he used to support his brothers and sisters is the same one that brought us to his new place months later: a spectacular gift for cooking. 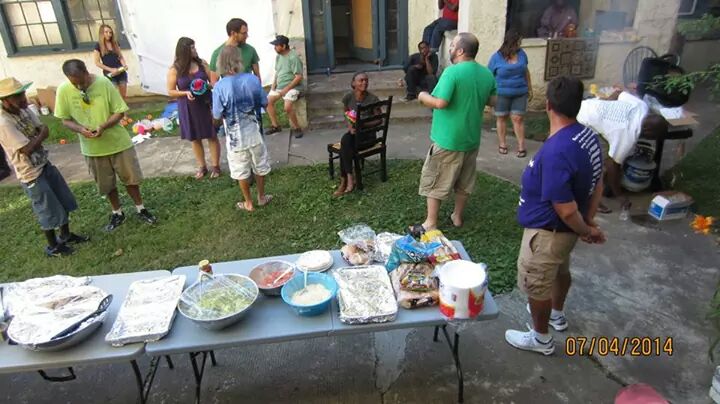 With the soft ding of the elevator, our attention turned to the meal that awaited us all in Alex’s new home. A first born son of Puerto Rican heritage, raised in East Harlem, Alex started learning to cook as a child. Describing himself as a “latchkey kid,” he once told me that when he was a child, he learned: “If I didn’t cook, I wouldn’t eat.” Though it wasn’t a straight path Alex took to get there, he eventually ended up in culinary school in New York City, learning even more not only about cooking high quality food, but also about the power of a meal to create and sustain community. Both in East Harlem and in culinary school, he was learning the practice of hospitality by so many other names. As we walked down the hall to his corner apartment—only a few blocks away from Little Calcutta physically, but miles away spiritually—we gave thanks for his hospitality a little more with every step toward the fragrant banquet awaiting us.

Some people might say that Alex ended up in Danville by accident, but we know the truth. God brought Alex to Danville by way of a winding path through addiction, recovery, loss, and at the encouragement of his children. In our experience, God loves the winding path and God loves making a way through the wilderness. As we all listened happily to the menu for that night’s meal, I couldn’t help but recall that it was food that first introduced us to Alex, when we ended up bringing lunch by Little Calcutta. He joined us for that lunch and many others, before eventually telling us why he kept showing up: “I saw you guys coming to eat, and I just liked the fact that you guys weren’t just helping but also just being there. I needed someone to talk to. I needed it more than a plate of food. I liked the fact that it was more about relationships than food.” That’s saying something for somebody who loves good food like Chef Alex.

We’ve hosted hundreds upon hundreds of meals since the leaders of Grace and Main first made our commitment to a life of hospitality, prayer, simplicity, and community building. But, as we broke bread, passed the cup, and bowed our heads to give thanks for the meal, we did so with special gratitude for the unexpected grace of this particular meal. We’ve hosted many meals and seen lives slowly changed over spoons clinking softly in bowls, but we’ve learned that being committed to hospitality is about more than hosting meals. As we try to give our lives over to welcome and building family on the margins, we’ve learned something:  our commitment to hospitality doesn’t make us hosts, it makes us witnesses. 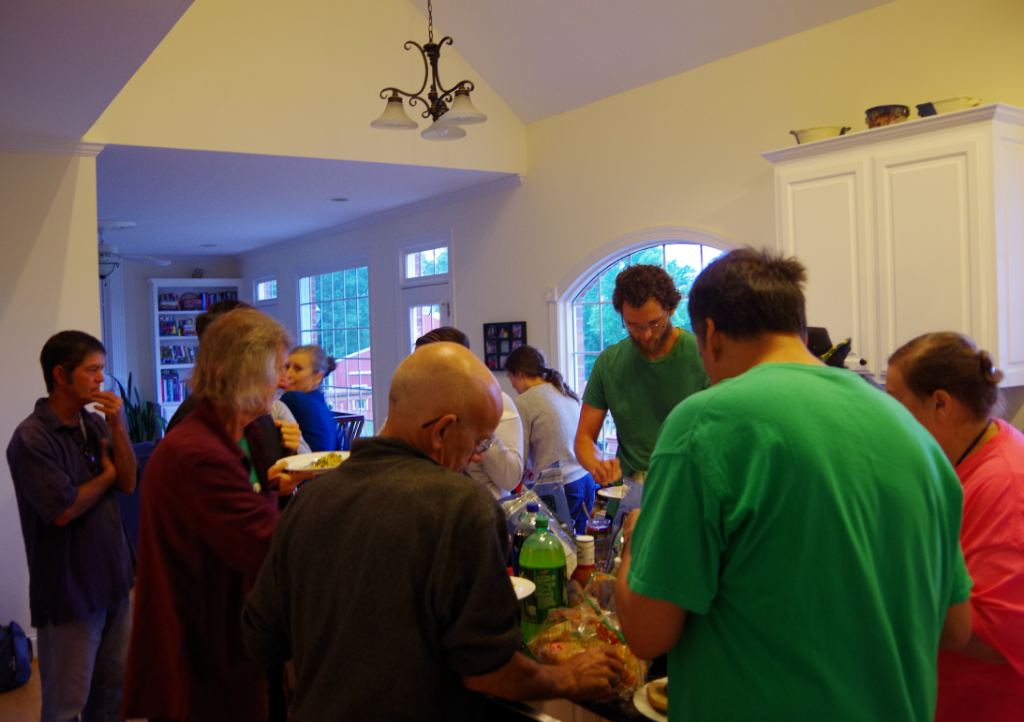 What Alex reminded us with broiled fish and a delicately seasoned butternut squash soup was that all good gifts come from God above. God isn’t anxiously waiting on any of us in order to do something, but is in fact inviting us to see what God is already doing with seemingly misplaced chefs and carpenters, teachers and preachers, doctors and the sick. God’s call upon our lives is not some desperate hope that somebody might do what the Kingdom needs, but is an invitation to a better and more blessed way of life. God is the host and we are the guests and witnesses of God’s goodness, whether it’s in “our” homes, in the homes of formerly homeless brothers and sisters, or on a street corner or porch.

The meal that night was quiet for a while, except for the babbling of my only-recently-started-crawling daughter, but only because the meal was one of the best we’ve ever had. A few more than a dozen people gathered around a couple of tables marveled at what Alex did with relatively meager, but fresh, ingredients. Most of those gathered had lived in Little Calcutta and were nearly anonymous victors over the injustice there. They had eaten at Chef Alex’s table many times when food was tight and money was tighter. But this night, there was only celebration. Brothers and sisters, who once had nowhere to lay their head, ate a meal together and told stories about Little Calcutta—a place no one wanted to return to, but where the Spirit had moved anyway.

As the meal dissipated, we carried our laughter and joy back down the hall to the elevator and to our cars. Having been guests at Chef Alex’s table, we were pleased to find that once again we had been witnesses to God’s goodness. That night, we gave thanks not only for good food, but also for each other and all the winding paths that God used to bring us all together in the home of a formerly homeless man with a penchant for holy mischief. It might not have been the fanciest meal in the city that night, but I’m pretty sure it was the best one.