***
This month’s newsletter was written by Kenneth Bond, a member and leader at Ascension Lutheran Church, a partner congregation with Grace and Main Fellowship and Third Chance Ministries.
***
There’s an old saying, “If you want to make God laugh, tell him your plans.” I never planned on joining a church, I was just looking for a place to hang out at one Christmas and I never planned on spending one Thursday a month cooking dinner for 60 to 100 people. But God had other plans.

Like today, I was asked to read Bishop James Mauney’s sermon today as pastor is away, but after reading it over I asked if I could speak a little about my experience with the Grace and Main dinners, as in reading his sermon a couple of things touched my heart. The Bishop starts with asking us to look at today’s Prayer for the day, which I’ll ask everyone to do right now:
“All-powerful God, in Jesus Christ you turned death into life and defeat into victory. Increase our faith and trust in him, that we may triumph over all evil in the strength of the same Jesus Christ, our Savior and Lord.” 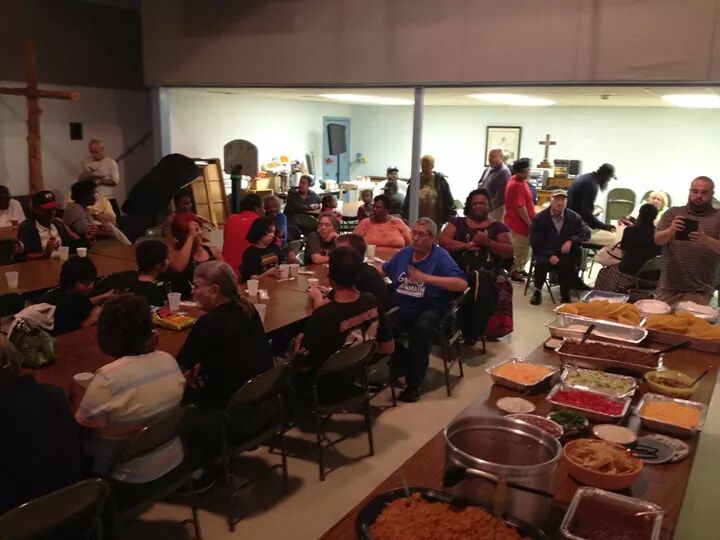 He then talks briefly about “the weariness of the land” and that watching the tv news can make you weary in two minutes! But then he says, “My Jesus is a rock in a weary land!” And that spoke to me, because in many ways that is what we have become and by the Grace of God will become more to the folks at Grace and Main. Part of the rock for a weary land.

You see in the 2 and a half years we’ve been doing this, I’ve seen the dinners grow from a—forgive me for saying it this way—but “let’s be good Christians and feed the homeless” to a community of people who love and care for each other and a church that has opened its heart in love and hospitality to some folks who do live in a weary land.

We were asked in the beginning to be part of what Grace and Main called [their weekly feasts] with [other congregational partners]. That’s now down to just one, us and—at the risk of sounding negative towards some my fellow brothers and sisters in Christ, but I have to say with some pride—it was our attitude of hospitality and service from the beginning that made Grace and Main ask if we would keep doing the dinners when they [changed to their new way of doing meals]. That is because I’ve seen time and time again, members of Ascension come forward and give of their time, talents and money to help with love of Christ in their hearts.

And maybe it’s not so silly that God chose me to be the head cook, while I’m not “trained and professional” chef, I do come from a line of some pretty good cooks. I remember when I was younger never having to worry about inviting someone over at the last minute to our house for dinner as there was always enough food. Students of the college my folks taught at, their colleagues, friends or family. If you were in our house near dinner time you were asked if you wanted stay and eat.

And then there’s a family story about my grandmother, my father’s mother Sadie. It was during the 30’s, my grandparents were moving from Frostburg MD, to Riverdale MD for a job my grandfather had with the railroad. On the day they were to leave the Chief of Police came by the house and asked to speak with my grandmother. Now as they say, my grandmother was a “God fearing” woman and got very upset and wondered why in the world the Chief of Police would want to speak to her. The Chief said he was sorry to hear that grandparents were moving and they are going to have to do something that they had not done in a long time, repaint all the jail cells after grandparents left. When asked why, Sadie was told that in every cell was her address and under that for a good meal. 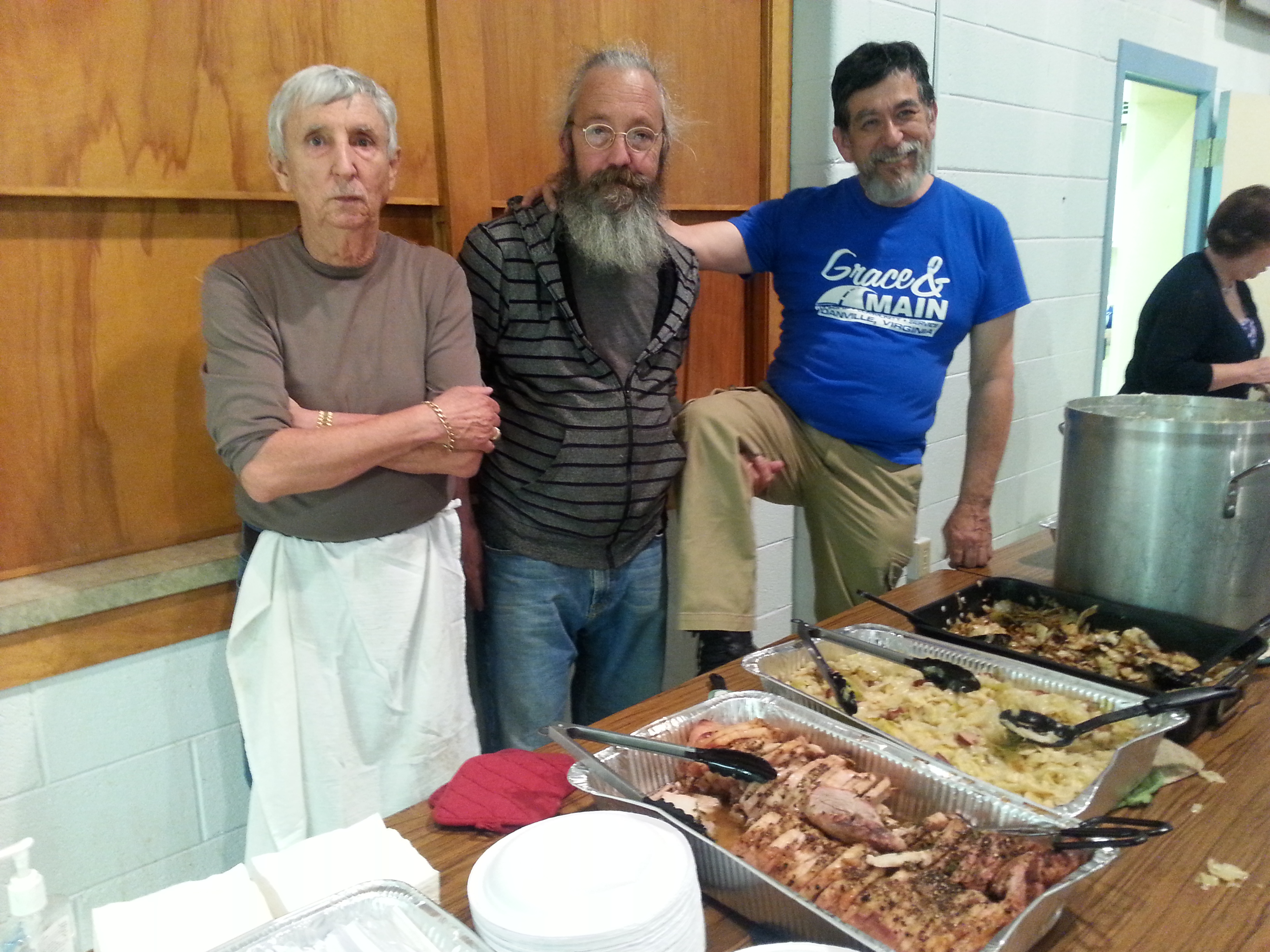 I didn’t hear this story until I was in my 20’s, but I can remember when I was younger and would go spend a week with my grandmother during the summer that every now and then a man would come to the back porch and knock on the screen door and ask if there was any work he could do for a meal. Sometimes there was and sometimes there wasn’t, but there was always a meal and a cooked meal at that, not leftovers. Sometimes it was fried chicken and if I was lucky enough I’d get a drumstick. She would cook the meal, put it on a china plate, roll the silverware in a cloth napkin and hand it to me to take to him as he was sitting on the bottom step and remind me to be polite and not bother the “gentleman” while he ate.

They were what they used to call hobos, though I didn’t know that at the time. But I never once felt from my grandmother that there was anything “wrong” with them. They were just people maybe a bit down on their luck looking for some hospitality and a good meal. A place to rest for a moment, a rock for a weary land.

And that’s what I see every 4th Thursday of the month, because as I said, I’m not a “trained and professional” chef and cooking for 100 is not the same as cooking for 10 and I wish I could carry the faith I’m learning doing the dinners into the rest of my life. Cause no matter how hectic it gets or what goes wrong (and if you been in the kitchen right before serving time you’ll know what I mean) or how much I worry and plan. God has a plan and the Spirit moves and for some crazy, graceful reason everything always works out.

I don’t see people with mental illness, addiction issues or other problems. Nor do I see “good Christians and feeding the homeless.” I see a group of people maybe a bit down on their luck looking for some hospitality and a good meal meeting a church congregation that have opened their hearts to do just that. So every 4th Thursday of the month at the end of the night I go home and post on my Facebook page: “God was praised and people were fed.” 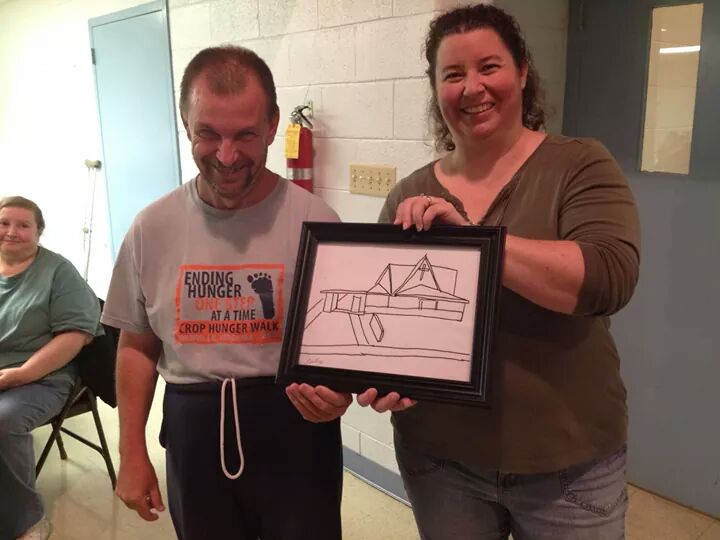 Which brings us to Ascension House, I am in awe and am very proud of this church of how much support that idea has already gotten. I don’t know God’s plan, I know some of ours, finding ways to mentor people in the neighborhood. And that’s what touched my heart when I read the Bishop’s “a rock in a weary land.” I can see Ascension House being that and this congregation opening their hearts to do just that.

So in closing I would like to end with the last two paragraphs from Bishop’s sermon: “Our Synod Assembly theme this year is ‘Ambassador for Christ: Knowing your Congregational Neighborhood to do God’s Will.’ You see, from that font, it is extending the grace to more and more people, so that the thanksgiving that Jesus is a rock in a weary land may be felt by the ones who are so lonely near your church, that the ones who despair within one block, one pasture, one mile, one stone’s throw, may too know a rock in their weary land through your kind spirit that searches them out and invites.

My Jesus is a rock in this weary land. He is not just My Jesus, he is their Jesus, their rock too. But by our single word of knowing them, they too may triumph over all evil in the strength of the same Jesus Christ, OUR Savior and Lord. Amen.

***
If you’d like to make a donation (one-time or recurring) to continue to support our work, you can do it online at: bit.ly/3CMdonate.